Deep State gonna Deep State. Is every federal agency overrun with traitorous liars? Mmmmaybe. Take a look at what follows, and ask yourself, if this weren’t intended specifically to incite panic, how would you have written it differently?

Last Monday, 24 February, the CDC posted the following on CDC.gov:

“More cases are likely to be identified in the coming days, including more cases in the United States. It’s also likely that person-to-person spread will continue to occur, including in the United States. Widespread transmission of COVID-19 in the United States would translate into large numbers of people needing medical care at the same time. Schools, childcare centers, workplaces, and other places for mass gatherings may experience more absenteeism. Public health and healthcare systems may become overloaded, with elevated rates of hospitalizations and deaths. Other critical infrastructure, such as law enforcement, emergency medical services, and transportation industry may also be affected. Health care providers and hospitals may be overwhelmed. At this time, there is no vaccine to protect against COVID-19 and no medications approved to treat it.”

As of this writing, it’s still posted. HERE 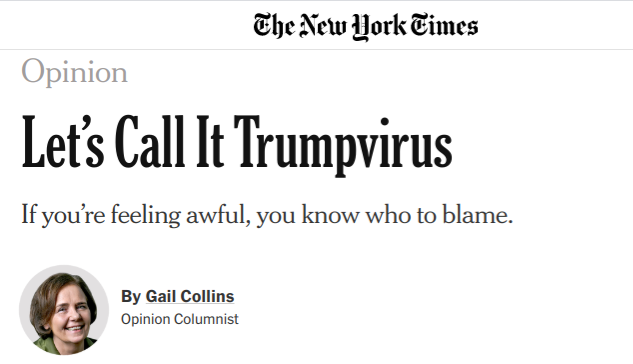 Think this is just politics? Everything is fair game?

How do you think the travel industry is doing with all those flights to Asia either empty or cancelled?

American Airlines has lost a third of its value since 12 February.

I’m on nine flights in the month of March (all domestic), and I can’t wait to see the nonsense at the airports.

The virus qua virus almost certainly poses little risk in the U.S., at least as compared to the normal everyday flu, which will kill THOUSANDS more Americans than COVID-19 ever will. The verbiage in the CDC advisory is borderline hysteria. However, the potential to politically profit from it will tempt the traitors toward intentionally worsening the situation in other ways. Did you see twitter this week?

You do realize how much “stuff” we buy from China, right? You can imagine a scenario where the downstream consequences of this thing are pretty meaningful, right? Who needs an old Access Hollywood tape when there are bare shelves at Wallymart three weeks before the election.